But the end is in sight (only for another beginning...I'll get to that in a minute...)

A year ago I sat in our formal IEP meeting surrounded by 11 people. Some on "my team" some part of the new team and administrators from his new school. It was the kindergarten transition meeting. After introductions, they turned the meeting over to me to introduce myself and provide my concerns. I began my little speech about how I wanted it ON THE RECORD that I thought it was insane that we were being forced to put Joshua into Kindergarten even though he could really have benefited doing a transitional K program. See, he turned 5 the same week Kindergarten started (he's year round school starts in July). I fought them on this but once they meet the age cut off they had to move into kindergarten or fore-go services. We couldn't afford for him to lose a year of services. But I wanted an official statement in the minutes recording my displeasure with this. The minute I had to open my mouth and really advocate for Joshua and the reality of the situation I couldn't help but sob. Of course, they were polite and acknowledged the issue but nothing they could do so we need to move on...blah blah blah.

Typical IEP meeting proceeded where I said I know my kid he needs this and they said, no not really he needs this, oh we don't do that but he needs that...back and forth back and forth until somehow an agreement was made and Joshua's Kindergarten IEP was finalized. Then the reality hit a month later....he had to actually GO to kindergarten.

I tried to tell them that transitions would be hard and separations would be difficult. The first two weeks Joshua was a saint at drop off, heck he even looked like he was enjoying himself....and everybody was like "see we told you not to worry..." But I knew my son and I knew that the minute he realized this was an EVERY.SINGLE.DAY thing the honeymoon would be over. About two weeks in the tears started. Carpool was no longer a breeze....he refused to get out of the car. I looked to others for help on how I should handle this. Most days I had to drag him into school and listen to his plea's for saving. I cried most days too. I knew it was just the beginning. Most people probably just saw an over protective mom and tried to reassure me that he'll be fine he'll get used to it. They didn't understand that my tears were something deeper because I understood the truth of the situation, he wouldn't get used to it not for a very very long time and I knew I could not listen to him scream every day. I didn't have the emotional capacity to bear the burden. I'm a sensitive person as it is and mama bear instincts come out pretty quickly.

Well, since me walking Joshua into school every day and listening to him scream and him willingly getting out at car pool was not going to work I needed to get creative. So we signed Joshua up for before school care held at the school by the Raleigh parks and rec. This meant for a longer day for Joshua but it also meant a transition time of play before school work started. Also, it meant Matt would drop him off on the way to work instead of me. He still cried when dropped off and had issues but I wasn't there to hear it therefore his cries were not drilled in my head the rest of the day. Also he wasn't crying in front of all his classmates, there were kids there but it was a small group and a spectrum of kids from all grades. It took most of the year but this past month or so drop offs have gone remarkably well and we are happy with the situation.

He finishes Kindergarten in 4 days and then has a week off and then we begin our first grade journey. I think this transition will go much better. But I'm sure the year will bring many more ups and downs but I know I have watched a boy grow so much over the past year that I can say with pride and adoration that Joshua is ready for first grade. The only tears I cry now are those of heartfelt pride. The key to his success lies in the support of his therapists and resource teachers at school and we were so blessed with an amazing teacher and TA who has just loved Joshua all year and made sure that he succeeded.

Now I think it's time to plan a MNO and take a deep breath and have a few drinks...
Posted by Sherri at 5:41 PM 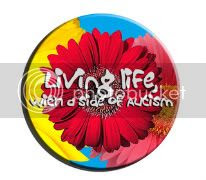